The official list of participants was released early this year.

Praise where praise is due: well done Bilderberg for starting to behave like a grown-up political summit. Good behavior like this should be given positive reinforcement - I feel like I should ruffle Henry Kissinger's hair and toss him a meaty treat. Alas, I think I might be dropped by a sniper before I could reach his wheelchair.

That's if I managed to get past the eagle eyes of Senator John Kerry. He's attending this year, alongside Governor Mitch Daniels of Indiana.

I can imagine they'd grab an arm each, while Nick Boles MP stood on his little stool in the corner, jeering, as I was dragged from the conference room, and booted into the parking lot by Mark Rutte, the Dutch prime minister, while Michael Noonan, Ireland's minister for finance, tells me in no uncertain terms to get lost.

Which, by the way, is news to me - Ireland has a minister for finance?

What a lovely lot of politicians we've got at this year's Bilderberg. What a shot in the arm for democracy. I don't know if Lord Mandelson belongs on a list of public servants, but he's here; he's becoming quite a regular these days.

Mandelson will be striving privately towards a better world with the Polish finance minister, the Finnish finance minister - and, wait, who's this…? Why, it's cuddly old Bilderberg insider, the Lord Chancellor, Kenneth Clarke MP.

No wonder the press officer at the Ministry for Justice last week was so unwilling to talk:

"I'm not in a position to either deny or confirm that the minister will be attending."

That's exactly the sort of transparency and openness Ken is so keen to see implemented - as he said only a few months ago:

"Transparency is the most effective public inoculation against corruption that any country can have. There is a strong public interest case for almost all government information to be open to scrutiny."

How very true. I feel a Freedom of Information request coming on.

Ken's presence makes up somewhat for the big absence of 2012: no David Rockefeller!

What on earth would make the 96-year-old mega-banker miss his favorite big-money shindig? I guess Wisconsin must have rescheduled its annual Biting The Heads off Small Mammals Competition. Poor David, such bad timing. But I guess he's got a title to defend.

Even without Rocky, there's a stellar cast from the world of banking and finance. Old favorites like Agius and Flint (the chairfolk of Barclays and HSBC), and a new name on my radar - Michael J. Evans - who enjoys the elegant title: vice-chairman, global head of growth markets, Goldman Sachs.

Evans will be conferencing with his esteemed colleagues, James A. Johnson (director of Goldman Sachs) and Peter Sutherland (chairman of Goldman Sachs International) - the last two both members of Bilderberg's Steering Group. The strong Goldman showing this year does so much to reassure me of the benign and worthwhile efforts of Bilderberg. They just want to get on and help us, quietly and secretly.

Like a corporate cross between Santa Claus and a big friendly squid.

Another lovely chap from the world of banking is Timothy C. Collins. Tim is on the board of Citigroup, has his own giant private equity company (Ripplewood Holdings) and is a director of the 'Tony Blair Faith Foundation, US'. Of the three, I know which one makes me trust him the least.

Speaking of Blair, there's some Tony Blair Bilderberg news just out. Mr Blair, as we know, attended the Bilderberg conference in 1993. Although he didn't, because he told Parliament that he didn't. So he didn't go. Unless he lied to Parliament about not going.

Mr. Christopher Gill MP: To ask the Prime Minister which members of his government have attended meetings of the Bilderberg Group.

The Prime Minister: None.

But here's the thing… footage has just been released by activists from We Are Change, who took the liberty of sticking a microphone in Tony's face and asking him the same question:

"Yeah, it's a really useful group actually, I remember going back to that in 1993, and we, er… it's a great way too for people from different parts of the world to get together, um, so it's been good."

Blair's powers of syntax may be waning, but his memory seems to have improved in the 14 years since he denied going. It happens. It's a well-known medical condition - kind of a Reverse Alzheimer's.

After the awkward admission comes the killer question:

You have to watch Tony Blair's discomfiture at that question. His answer is basically:

Watch it. And then wonder to yourself why such a skilled politician would tell such a stupid lie in the first place. Luke Rudkowski is the We Are Changer who put Blair on the spot.

He's here in Chantilly, outside Bilderberg, with more recording equipment strapped to him than the average moon lander.

"It's huge," he says, as he records the crowds.

And the crowds just keep on growing.

By early afternoon on Thursday, there are well over 200 people, and they keep rolling up. I hate to curse Bilderberg 2012 by saying this so early, but it feels like… this could be the big one.

"Everyone's becoming citizen reporters these days", says Rudkowski - and even as he says it, we're being filmed by a representative of Occupy Portland.

And over on a grassy knoll, the police are filming us being filmed.

There's so many cameras here, so many budding documentarians, so much youth, determination, tech savvy and political awareness - if I was Henry Kissinger, I'd be ordering another napalm strike right outside the gates of the Marriott.

The mainstream press dropped the ball on Bilderberg; in fact, I'm not even sure they ever had it in their hands. So people like Rudkowski have had to step in, pick up the ball, re-edit it, and stick it online with comments enabled. At Bilderberg 2012, the mainstream press is quite simply being bypassed. And there's me with my pen and notepad, interviewing Luke, while he livestreams it.

I feel like a caveman with a bad haircut talking to an astronaut.

I ask Luke why he's come.

"I try not to theorize. I go to the source. I try and find out exactly what's happening."

Rudkowski used an article I'd written at Bilderberg 2010 to put Blair on the spot. In my piece, I'd used the evidence available online to call Blair a liar. Rudkowski went to the horse's mouth.

Which, to be fair, isn't much. The Bilderberg Group isn't much good at telling their own story, which is a shame because it's quite a tale.

"to open the dialogue", he says. "Conversation and communication can help fix a lot of the problems we're facing."

Although I'm not sure that some of the things said to Blair on that video could fairly be described as 'dialogue openers'. Another new media luminary working the gates at Bilderberg is Jason Bermas, of Loose Change.

"I took the pat-downs. No body scanners for me…"

"because we have to be here. The media has trillions of dollars to spend, and they're not here. But we have the technology, and I believe technology is the power that will lighten the darkness."

The power jumps a few thousand watts when an SUV rolls up and out hops the Oprah Winfrey of alternative media: Alex Jones.

Millions listen his daily thunderings against the 'Empire of the Bankers'.

He's broadcasting his show live from the police line, streaming video, one moment educating the police on global power structures, the next minute bullhorning some poor billionaire delegate as they try and slip inside unnoticed. 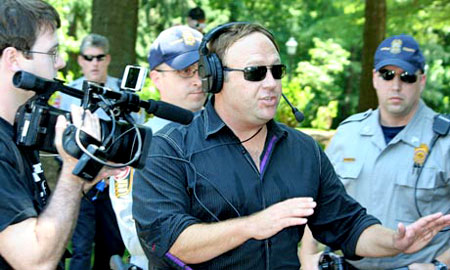 from the Bilderberg 2012 protest line

Photograph: Hannah Borno for the Guardian

It's a kind of live interactive news documentary history wildlife show, a roar of protest from the lion's den, and everyone feels a part of it. The wall between people and events - that dusty old safety barrier between the news and its consumers - it's tumbling down around Bilderberg.

This the working media. They're out here, in the Virginia sun, working hard. Livestreaming, uploading, swapping data, checking audio feeds - in short, reporting the news.

And why? Short answer: because CNN isn't.

To be fair to the dinosaurs, this year saw an actual proper mainstream journalist turn up to Bilderberg: the Washington Times sent Ben Wolfgang, who wrote an extremely decent piece - so there you go, mainstream news: it can be done. You may be late to the party, but there's plenty more booze behind the bar. Pour yourself a drink, and let's talk about the transnational machinations of the technocratic banking elite.

You might want to sit down, this is going to take a while.

It all starts with Plato…